In a recent essay by Phil Klay (https://www.theatlantic.com/magazine/archive/2018/05/left-behind/556844/), he reviews the impact of war on the individuals fighting – the need to know what mission success really is, the need to know that America is unified in support, and the need to know the exit strategy from such experiences. He also highlights, heavily, the need to ‘fight’ as a team of not only boots-on-the-ground warfighters but also to include civilian diplomatic team members and Americans-at-large. He concludes with the statement,

“If your country won’t…resource the wars with what its own generals say is necessary for long-term success, what else is there to fight for? …if you think the mission your country keeps sending you on is pointless or impossible and that you’re only deploying to protect your brothers and sisters in arms from danger, then it’s not the Taliban or al-Qaeda or isis that’s trying to kill you, it’s America.”

Strong words from a former Marine. Now the question is: What do we do about this? 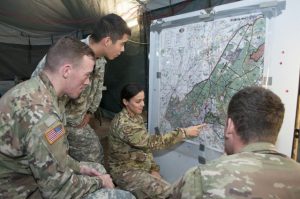 I frequently write about the need to transform from being a reactive nation to being a proactive one. Whether or not we are aware of the sentiment being described in this essay, if these are the questions being asked by our troops, then at the least, it is a brewing issue and we need to think through our ‘team’ strategy, our readiness as a nation, and our exit strategy from constant wartime actions. What, how, and why does this affect all Americans?

Today it primarily affects individuals on active duty but if the concerns Mr. Klay elucidates are true, then the “sickness,” as he calls it, is permeating like a silent virus through our nation and affecting us beyond our active duty troops. If his assessment is accurate and his concerns for the future true, then we have work to do if we want to maintain our world leadership status. For brevity sake, I’ll start with a short list of high level reactions:

When we work as a holistic team, “readiness” at scale will ensure we are a nation that understands mission success and supports it efficiently and effectively. It’s not about being the lowest cost, technically acceptable force, it’s about being the most lethal and capable one.